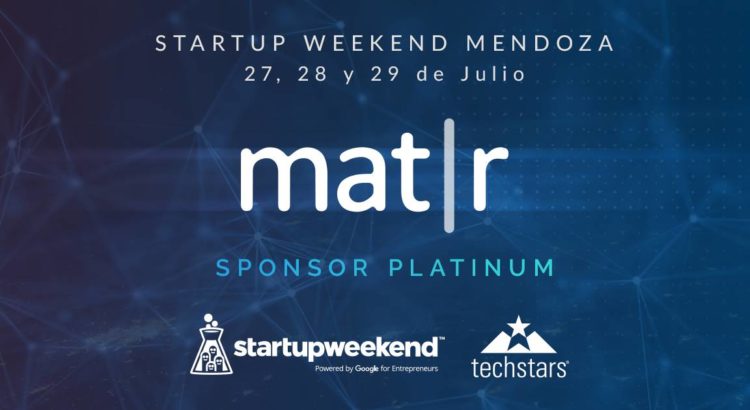 Get ready for 54 hours of Entrepreneurship at Mendoza Startup weekend! On July 27th, 28th and 29th, technical and non-technical entrepreneurs will take part in this event. The attendees will learn how to work on their ideas, develop their prototypes and validate their business ideas during one weekend.

Claudio Marrero, mat|r’s Chief Evangelist, will be giving a talk on prototyping and introducing mat|r as well.

Mat|r is a tool designed to solve entrepreneurs’ problems.

Entrepreneurs are setting up a new business of their own. To do so, they will need to choose adequate tools and new technologies in order to achieve more efficiency and effectiveness.

When developing the app of the business idea, they will be able to build a prototype which allows them to put their ideas into effect. However, this is not enough when the time comes to looking for new investors or trying to sell the product idea.

Evidently, investing in developing a complete app does not make much sense as the financial risk taken by the entrepreneur is high. Nevertheless, mat|r is the tool to shorten the gap between prototyping and the development process. This is so, because only with a few code lines, and at a very low price, the user could use these prototypes or apps instead of resorting to presentations with innovation teams. The change would be radical. It would no longer be referred to as ‘the idea’, but as something more tangible and concrete. All this without making too much of an effort to get it: just building an Android and iOS App by reusing the same code and saving costs, such as:

Mat|r would accelerate the process greatly. Designs with prototypes are useful. However, prototypes of ideas have many advantages. They allow such ideas to be tried out, analyzed and argued about. Especially, when taking them to the real world through the app, it is possible to show them to users, getting feedback and entering an interaction-improvement phase.

The first app prototype to develop in mat|r by an entrepreneur could be built under the following conditions:
In less than 24 hours
With 0$ budget

With mat|r, the entrepreneurs are able to validate their prototype with real users because the platform offers flexibility as to designing, checking and testing prototypes in Android and iOS devices. This allows having a broader perspective of the experience the entrepreneurs want to sell.

Mat|r also enables the entrepreneurs to progress rapidly with the development of their business or company. For this reason, the entrepreneurs may not have the pressure of failing. Besides, they can define the requirements of their products accurately, understand problems at technical level and, most importantly, get funds and investors.